BRACKMAG ISSUE 3 / THIS IS HOME 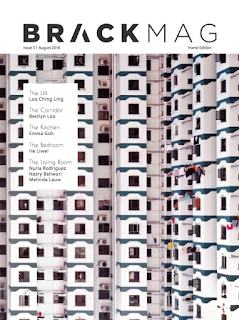 We're proud to share a new issue of the #BrackMag in collaboration with the cultural mapping project ‘This is Home’ organised by Matt3r, which ran from Oct 2015 to May 2016. It documents the culmination of the project in the exhibition 'This Is Home' in Dec 2015, which opened in the social space The Recess and then travelled back home to Queenstown Library and Community Centre. The collection of stories form reflections on the themes explored in the artworks, including: Loo Ching Ling’s rumination on routines of a HDB dweller; Bestlyn Loo’s discussive piece on the liminality of the corridor; Emma Goh’s fictional piece that matches the “mixture of abstract and realistic arrangements” in both artists Ng Hui Hsien’s Sands and Sufian Samsiyar’s The Imaginary World of Tanglin Halt. He Liwei’s footnotes from a stranger’s notebook. From afield, Melinda Lauw explores (such a lack of) space via the Fung Wah Biennial in New York. Issue Editor Nazry Bahrawi considers Singapore vis-à-vis Penang. We’ve poured our hearts into the making of this volume and there's so much more inside that we would like to show you. The magazine is freely available online now. Next month we're back at My Queenstown for a xinyao concert. We'll have more details later. Meanwhile, read it, share it, we'd love to hear from you. Read this issue
Publicat per PIRÒMANA D'ARGOS a 22.8.16

Envia per correu electrònicBlogThis!Comparteix a TwitterComparteix a FacebookComparteix a Pinterest
Etiquetes de comentaris: THIS IS HOME

A CHAT WITH ALICE LEE / QUENSTOWN RESIDENT / MY TEAMMATE 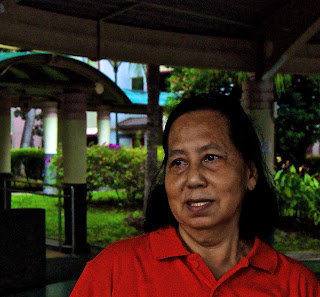 Alice, can you introduce yourself?
I am a resident of Tanglin Halt. I have lived here for 38 years. I am 67 years old.I have two children, one boy and one girl. My hobbies are going to look for places to eat. I’m a fussy eater but I like to look for new things to try. I like to eat together with my friends. I also like to travel, to go overseas with a group of friends. Eat together! Enjoy together!
What do you think of your artist?

<Laughs> I think she looks very young. And what she is doing is very meaningful, so I try my best to help her. For example, she used the games that we played in Singapore 50 years ago. She’s bringing them out to the public in Singapore again and in other countries also. This will remind Singaporeans of the games we used to play when we were young. This shows how children used to play in Singapore, so we can teach the children today of these “forgotten” things.
How do you feel about performing together with Núria?

I thought it was very meaningful. Her movements are so beautiful, they really attract people to watch. I wanted to watch her more, but I remembered the filming so I tried not to turn my head.  Also when we were together, we could communicate and connect through the performance.

What do you want to tell people about Tanglin Halt?

I want people to know that Tanglin Halt is a place where the people have a lot of empathy. We have the KAMPUNG spirit! We eat together, talk together about what we are doing and thinking. The community is very close and feels warmly towards each other. Whenever anyone has difficulties, we will come together to help out. For example my neighbours and friends give me the keys to their flats. When they go out, if they forget to turn off the lights, or gas, or close the window, I will go over to help.
Last question, Alice. Why did you give Núria the saga seeds when you first met her?

These saga seeds are very meaningful to me. I have kept them for more than 12 years already. I collected them with my good friend when we went every morning to exercise together. Until now, I cannot bear to throw them away. We were very close friends. We helped each other a lot. When she was sick, I bought food for her and looked after her. She lives at nearby at Queens Close but something happened, some misunderstanding so from very good friends, we are now very distant. I still say hello to her. But these saga seeds remind me of her. I will think of those times we walked together and picked them together. Life was simple. I don’t blame her for anything. I trust her even now. So I keep these seeds by my side for so many years. She doesn’t know that I kept them. If one day she comes to my house, I will show her the seeds that I have kept. When you trust someone, when you have a friendship, you don’t throw it away. This is why I thought it was worthwhile to give Núria the seeds when we first met, because they hold a lot of deep meaning for me.

Envia per correu electrònicBlogThis!Comparteix a TwitterComparteix a FacebookComparteix a Pinterest
Etiquetes de comentaris: ALICE LEE, THIS IS HOME


SUNDAY AT BLK 35A. TANGLIN HALT
Notes from an opportunistic observer

When Núria first asked Alice to play a game of five stones with her, the latter laughed and promised to practise.

The simple game between a Girona native and a “married to Tanglin Halt” resident was an attempt to engage and connect two individuals dissimilar in age, culture, ethnicity, native language and background. For the performance artist Núria, physical engagement through a game created a perfect, safe space to reach out to Alice, the local resident she was partnered with – of whom she arrived knowing nothing about except that once, there was a game she enjoyed in her youth.

“Five stones” later became a motif in the work that resulted, culminating in their joint performance one muggy Sunday under the pavilion of Blk 35A. By accident rather than design, Alice invited 3 other residents to join in a group game of five stones, making up (with Núria) a rather unexpected but lovely crew of five. Sitting on a recreated street map of the area on the pavilion floor, the five “stones” were a literal, poignant reminder that places are created by the community that inhabits them.

Núria performed twice – less a performance than an expression of both her longing to connect and the multiple frustrations and anxieties of repeatedly trying to do so over the past 4 weeks of her residency. She interprets her local hosts’ conversations over their game through movement, at times disjointed, jerky and fretful in moments of isolation; at other times, fluid, joyful and expansive during moments of breakthrough in connection.

Alice and the residents had a surprise up their sleeves. Moving into a Stonehenge-like circle, they started an acappella choral singing of the Chinese- language lullaby 世上只有妈妈(Mother is Best), to Núria’s delight. The latter’s appreciation was not merely for the gift of the song – it was a particularly touching choice given the recent bereavement of one of the singers in the group. This was later shared with Núria – a true connection through the offer of vulnerability.

Other Tanglin Halt residents passing through the pavilion on Sunday must have been surprised by the surreal scene of a red-haired, 6-foot-tall woman leaping, twirlingand pirouetting around 3 singing ‘aunties’ and a silent, shy child. The strangenes,however, is only aesthetic. Underneath the surface was an expanding notion of home,place and family.